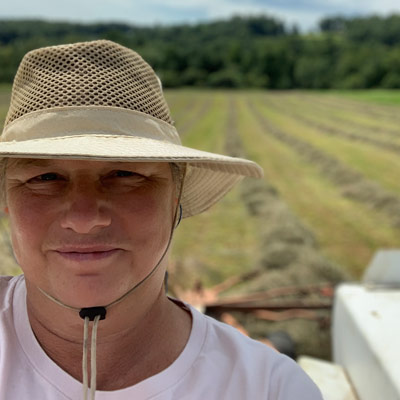 “When my family moved to Sullivan County from Long Island shortly before the 1969 Woodstock Festival, three things became clear to me. My love of nature, working the land, and this place my parents had brought me to would be interesting. Years later, I can say that still holds true.”

Amy Erlwein has spent the past forty years as a full-time farmer with her husband in Sullivan County, NY. They recently transitioned the farm from a dairy-only operation to its current form where they make and sell hay, raise their own meat, and maintain a large garden to grow their own food. Amy is a Master Preserver and prefers to can and freeze as much produce as possible for their family. They have raised two children and multiple pets, including cows.

Amy looks forward to continuing to help her community as a member of the Conservancy board.