Conservation Easements Tailored to Your Goals

Star Hesse and Mike Lovelace are proud of their 97-acre property in Lava, NY, outside Narrowsburg, with its rushing stream, large pond, abundant wildlife, extensive forests, and beautifully preserved historic farmhouse and barns.

They love their country life, and they love their land—and they especially love that it is protected forever with a conservation easement. “This was such a perfect thing for us,” Star explains. With the other plans they’d looked at, there were so many demands that they felt they’d give up control of their land. “With this you don’t give up control. You sign what you’re going to do…everybody agrees to agree, and you’re OK,” says Mike. The story begins a few decades earlier, however.

In the mid 1980s, when Star and Mike saw their airline jobs in New York City jeopardized by “downsizing” and consolidation of the industry, they began to consider what the next step in their life might be. Wanting to live on a pristine, large tract of land in a historic old house, they abandoned the idea of looking in over-priced and over-developed Long Island, where they had been living, and began their search for a home in northeastern Pennsylvania, which ultimately led them to the property that perfectly suited them in Sullivan County, New York. It has more than compensated them for the financial sacrifices they made to come and live here. Giving up higher-paying jobs for more modest ones here in Sullivan County, Star was able to get a job in a government social services agency and Mike, with expertise in airplane mechanics, worked at a series of local airports before finally starting his own airplane service business outside Honesdale, PA. 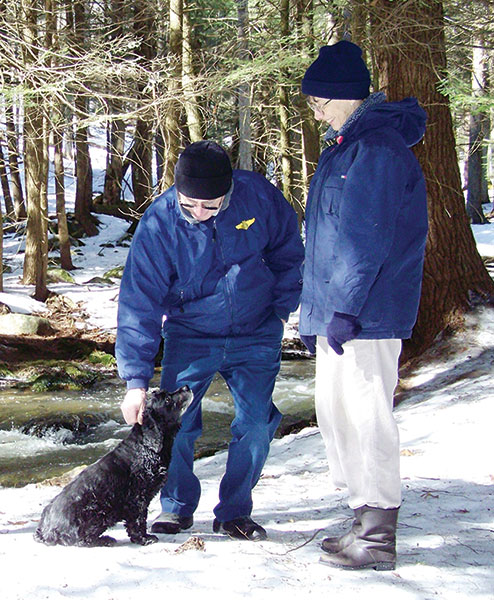 From the time they moved here, Hesse and Lovelace wanted to see their special property preserved. They just didn’t know quite how to go about protecting it for the future. “We didn’t think of something formal like a conservation easement, but we both felt from the get-go that we would never want to have our land developed,” says Hesse. They kept their eyes and ears open, reading articles and making inquiries, but nothing quite fit their needs.

Then in 2007 they read an article in a local newspaper about a woman named Alice Froelich who had protected her farm in the Kenoza Lake area of Sullivan County, NY, with a conservation easement through the Delaware Highlands Conservancy. A light bulb went on for them, and they called the Conservancy to inquire about how they could protect their land.

Hesse and Lovelace think there are a lot of other people in Sullivan County who are not happy with the development they see going on, the open space disappearing, and the animals getting driven further and further into the ‘hinterlands.’ “That’s another reason that the word should be gotten out, because some people who have property say, ‘Oh, we don’t want to do anything, because this is for our children, and our children have to get the money out of it,’ but they don’t understand, you can still sell it, the kids can still get their money, it’s just that it’s not going to rape the land in order to do it,” explains Star. “There are people like us out there looking for this type of property, so it’s not unmarketable,” says Lovelace, and it can be protected forever without the future owners having to give up all ways of making money from the property. Their easement, for example, allows for small noncommercial horse farming or a bed and breakfast operation with a couple of employees to help keep the property financially viable for future owners.

The Delaware Highlands Conservancy helped them preserve their land in exactly the way they wanted to do it, “but for other people who don’t really know what they want to do, the Conservancy can give them a very nice outline of what the easement can do for them and for their property.” Every easement can be tailor-made to suit the needs and desires of its owners, and Hesse and Lovelace are eager to spread that message to other landowners, especially in Sullivan County.