When I first met Eva Havas and her daughter Laurel, Eva was about to protect her parents’ treasured weekend retreat in Wayne County, PA with a conservation easement. By the end of 2009, Eva had brought that goal to fruition. But the story starts long before that.

In 1996, Eva’s parents Drs. Peter and Frances Havas, contacted Barbara Yeaman, founder of the recently formed Delaware Highlands Conservancy, to ask about protecting the scenic property that they’d purchased thirty years before. But their story goes back farther yet, to Europe during World War II. Political refugees from Austria, Peter and Frances first met at an anti-Nazi demonstration in 1938.

They soon married, beginning a lifelong happy marriage of 65 years. Their daughter Eva was born in France and a year later they were able to come to the U.S. with the help of a committee to aid scientists and the International Rescue Committee. They arrived here in 1941 and became citizens in 1948, completing their education here in the States.

Peter ultimately became a professor of physics at Temple University, and his wife Frances was a professor of immunology at Temple School of Medicine, doing pioneering cancer research which stressed the strengthening of the immune system, an idea ahead of its time. “My father,” says Eva, “became internationally renowned in theoretical physics and believed strongly that physics should not be used for warfare. There is an endowed humanitarian scholarship in his name at Temple.” 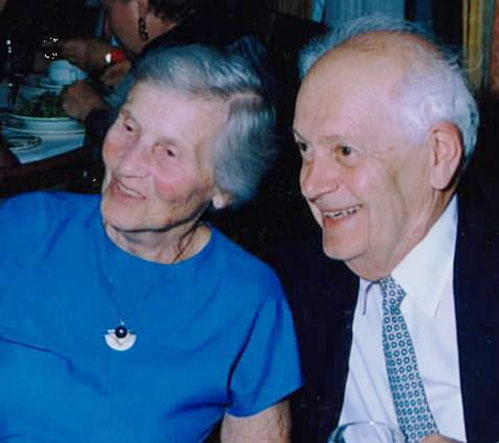 According to Eva, the Havas’ were very committed to social justice and land protection. “They were also a strong influence on both my daughter and me,” she adds. “My daughter has a Master’s in public policy and works on ‘The Hill’ in Washington for a Congressman.” Eva is retired from teaching sociology and social work at Boston University. Just as their social justice ideals impacted their family, so did their reverence for the land. Their daughter saw them plant 14,000 evergreen trees on the former farm in Smith Hill where the family spent many weekends and vacations. “They were the first to put in ponds; afterward many of the neighbors did it,” chuckles Eva. Over the years they cross-country skied in winter and enjoyed walks, picking blueberries, getting to know the area. They even spearheaded a community fight to keep a junkyard from being put in the neighborhood in the 1990’s.

Eva’s daughter Laurel made her first trip to her grandparents’ country home when she was two months old, and supports her mother’s decision to protect the land. After Peter and Frances died in 2004, within a couple months of one other, “I decided to follow through on their commitment,” says Eva. “I was told the Conservancy assured the strictest oversight of the land so there would be follow-through of the restrictions. I wanted to be sure that years from now the land would still be protected and that the agreement couldn’t be changed.” Eva also chose to exclude her property from gas drilling, an option that landowners can choose but isn’t necessary for all, as each easement is individually tailored to the owners’ wishes.

In protecting her parents’ 47-acre pristine hillside property of open meadows and forested woodlands with a conservation easement, Eva is carrying out her parents’ wishes. Assuring that the land so dear to them will be exempt from subdivision or development, no matter who owns it in the future, is her way of honoring her parents, their values, and their precious piece of Mother Earth.