The dairy farm on Gorr Road in Sullivan County, New York has been operating for more than 150 years—since before it was even called Gorr Road. It all began in the 1860s when the Gorr family, immigrants from Germany, acquired sixty acres in North Branch. The family built a home there, and the original foundation still stands—the remains of a home that once housed seventeen Gorr children.

One of those seventeen, Peter Joseph (or PJ, as he was known) built a home across the street, on another sixty-acre plot that the family acquired. It’s the house that landowner Chuck Laven is living in today. And if you look on an old beam in the barn on the property, you’ll see initials burned into the wood—“PJ and G. Gorr, April 18, 1879.” G. Gorr was PJ’s brother, Gus.

Chuck, who owns the property now, is only its fourth owner. Starting in the 1950s, it was farmed by Ray and Charlotte Kautz. Chuck made an agreement with Ray that if he ever wanted to sell the land, he would purchase it and keep it as a farm—and he kept his word when Ray decided to retire. Today, it’s Herm Herbert who continues to lease and run the dairy farm with his son, Herm Jr. And when Herm is ready to retire, Herm Jr. plans to continue the operation. 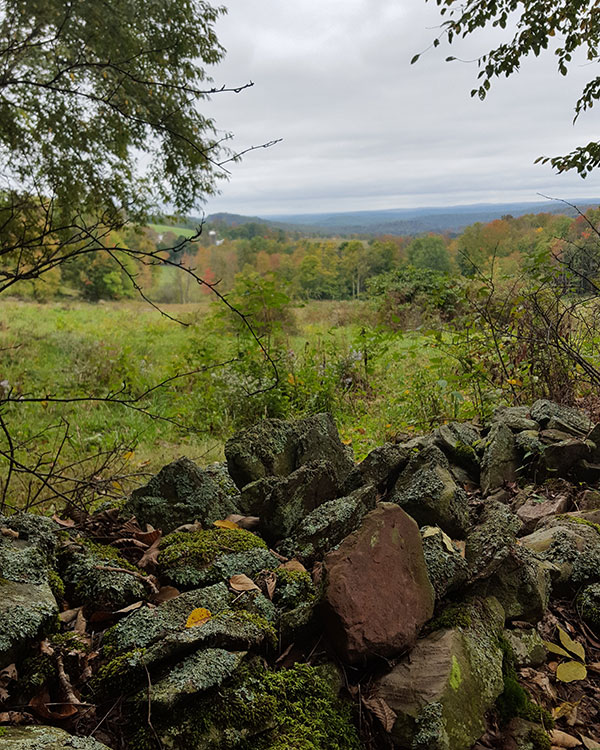 Chuck purchased his first parcel of the property in 1990, and continued to acquire the neighboring lands—eleven parcels in total—until he reached approximately 380 acres. Then in 2016, Chuck decided to work with the Delaware Highlands Conservancy to permanently protect 315 acres of this special property. “It was always in the back of my mind as I assembled the parcels that, at some point in my life, I would do a land conservation, limited-development plan,” Chuck explains. “And finally, the time came!”

The legacy dairy farm—in continual operation since the 1860s—is not the only remarkable feature of these lands. There’s also a freshwater pond and seasonal wetland, a number of small streams, forests, and old pastureland with fruit trees—all of which provide important habitat for wildlife. And the views from the top of the three hills in the property are spectacular—about 75 miles in every direction.

The property’s land protection agreement, known as a conservation easement, ensures that this land will never be developed—it will always be a farm or a forest. In addition to the two homes already standing on the property, the easement allows for the construction of a few additional homes, designed to minimize impacts on the farm and the landscape. This “conservation-oriented development” plan is based on Chuck’s background in architecture and his prior work with the Trust for Public Land.

Even when the additional homes are constructed, Chuck intends to keep the 315 acres as one large, open parcel, for homeowners to ski, walk, bike, and hike. The easement also allows for some recreational sites for camping, and he hopes to construct a trail around the property as well.

Chuck recognizes the importance of continuing the operation of the dairy farm, especially in this northern region of Sullivan County where a number of other farms are operating. “In order for dairy farming to succeed, you need to have enough of a concentrated mass of nearby farms,” Chuck explains. “All the things you need to make farming work—tractor repair, feed operations—aren’t available with just a single operating farm.”

The 2014 Agricultural and Farmland Protection Plan in Sullivan County identifies this region of the county as an important base for continual dairy farming, and Chuck hopes that some of his other neighbors will eventually consider permanently protecting their farms as well.

Local farms like this one provide fresh, healthy, food and support a sustainable local economy. They are not just an important part of our shared local history, but are drivers of our future success as a region.