To observe Russ Fairlie’s reverence for the land, it’s hard to believe he’s not the owner of the Mink Pond Club, its beautiful 40-acre lake and beaver-dammed bait pond. Actually, he is one of 60 members who co-own this pristine piece of nature that has a feeling of timelessness.

Russ loves to come here from his home in Berks County to immerse himself in the natural surroundings and, most of all, to watch his favorite pair of eagles, the same ones he’s been observing for more than a decade, carefully raising chicks every year until all of them fledge by midsummer. Four generations of families have belonged to the club, but how many more would get to enjoy this, unless steps were taken to assure its protection?

Its 100-year-old lodge, with original beams and fieldstone fireplace, a rustic screened-in porch and modest boarding-house style rooms speak of a bygone era that many of us yearn to recapture from our childhoods.Russ often brings his family to the club, where he and his wife take their grandchildren out in a boat to watch the golden-eyed and bufflehead ducks skim the water. 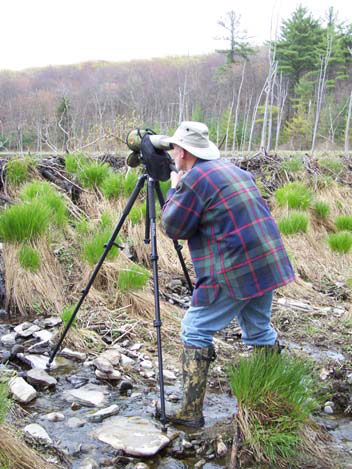 As the boat heads into the lodge for the night, they hope to catch a glimpse of an elusive nocturnal resident of the bait pond and are delighted when they hear the slap of the beaver’s tail on the water. In fact, the beavers have built the dam that turned this former swamp into the huge pond that now attracts otters, migrating ducks, songbirds, and of course, the precious pair of eagles. In recent years, as development encroached on two sides of the club, and the township tried to build a road through the middle of it, Russ and some of the other members began to realize the fragility of their precious acreage, so he got the members together and got their agreement to put part of the club’s land into a conservation easement.

While working with the Delaware Highlands Conservancy and two neighboring clubs on a federal Forest Legacy grant that would help offset the loss of value from giving up their development rights, the Conservancy discovered a Game Commission Landowner Incentive Program (LIP) designed to protect and support wildlife “species of concern.”

With its eagle’s nest and habitat for migrating ducks, turkeys, grouse, otters and rattlesnakes, the Conservancy felt that the Mink Pond Club was a perfect fit. By protecting 500-acres, including the bait pond, with a conservation easement in December 2009, the Mink Pond owners have assured that future generations of both current and future club members can continue to enjoy fishing, bird-watching, and hunting in the same unspoiled environment, just as their forebears have for over a century. Due to the dedication of Russ Fairlie and his fellow members of the Mink Pond Club, a very special piece of Pike County forest and wetlands have been protected from development and preserved for posterity.