A group of land parcels in Sullivan County, New York known as Mongaup Sanctuary is protected with a conservation easement with Delaware Highlands Conservancy. The 100 acres include a wetland with a creek running through it, open fields once used for farming, and woodland.

This varied habitat is home to mammals including bobcats, deer, and flying squirrels, many plant species, and at least 87 bird species from abundant wild turkeys to the rare pair of resident red-shouldered hawks that fledges a family here almost every year. The property in this easement is part of a block of undeveloped land that includes state land, a hunting club and a scout camp, all in close proximity—important for a number of reasons.

“The protection of our land is more valuable because it’s not just an isolated area, and because it’s part of the Delaware River watershed,” says Mike Smith, who owns this land with his wife, Linda. 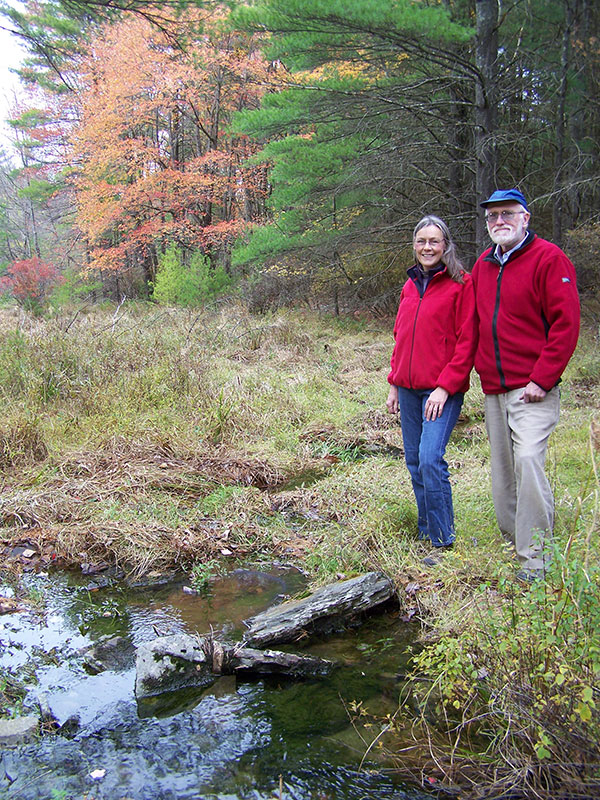 The Smiths met at Cornell University in the 60s when Linda was studying mathematics and Mike was getting a degree in wildlife management. After that, Mike explains, “We corresponded ‘across the planet’ while I spent three years running around the world.” While getting his Master’s at the University of Alaska, Mike became convinced that’s where he wanted to live. He came back to Cornell briefly to marry Linda and complete his PhD in natural resource management. Then, with the promise of a job teaching math for Linda, they packed all their belongings in their van and drove to Anchorage. Forty years later they still make their home there. Living in Alaska, Linda says, “We often take for granted that we’re surrounded by so much public land. We have state land, federal land, lots of parks.”

So why do they come back every year, spring and fall, to the land of their roots in Glen Spey, New York? Mike’s family goes back five generations to his great-great grandfather, who bought land here to build the original family farmstead in 1851, and did subsistence farming. His great-grandfather became the first supervisor for the Town of Lumberland in the 1890s. His grandfather developed a good chicken, egg, and pig business from 1920 through WWII, and also worked as a carpenter at some of the big summer estates in Glen Spey, where he met his bride, a domestic who’d recently emigrated from Ireland. They raised three children, Mike’s dad and his two aunts, who all married and moved away but never lost their connection to the family farm where their parents lived out the rest of their lives. “Mike was raised in New Jersey and came to New York often to visit his grandparents on the farm. I was raised in New York and visited my grandparents in New Jersey on their farm,” quips Linda. Mike’s two aunts continued to buy land adjoining their family’s original farmstead, and Mike and Linda have continued to enlarge the Smith family’s holdings to the present 105 acres.

The Smiths have chosen to protect the undeveloped 101 acres from subdivision, allowing only recreational, limited agricultural, and woodland uses. Though they plan to spend their retirement here and deed the land to their children, their easement assures their property will be protected in perpetuity, no matter who subsequently owns it. Its proximity to other protected lands provides significant public benefit by ensuring that precious habitat will continue to be available to the large variety of wildlife that populates this historically protected environment.