The Real Value of 1,000 Forested Acres

George Stone’s woods and streams were acquired by his father over a period of more than twenty years. Returning from World War I in 1919, James K. Stone bought land with a clear-running trout stream in the area where, as a young boy, his father taught him to fly fish.

In 1927 he showed similar foresight in business when he pioneered the building of first U.S. shopping center “Suburban Square” in Ardmore, PA. As James Stone’s fortunes improved, and contiguous lots came up for sale, he added to his Pike and Monroe County forestland. Today it covers over 1,000 acres, including the headwaters of the Paupack Creek, a major tributary to Lake Wallenpaupack. Though it is prime land for development, George chose another route.

During World War II, the Stone family moved to their country home, and young George attended school in Greene-Dreher Township for six years and renewed his love for fly-fishing and forest wildlife. After college, and newly married, George and Cissy Stone lived in the Northeast before his textile business necessitated a move to South Carolina. Now they commute frequently between their home in the South and their woodland retreat in Pennsylvania.

George Stone describes his land as host to “a Northeastern hardwood forest of cherry, ash, beech, basswood, soft and hard maple, red oak, and hemlock.” His woods shelter native species like white-tailed deer, black bears, pileated woodpeckers, bluebirds, red-tailed hawks and Monarch butterflies. Stone takes particular pride in showing visitors the 350-year old hemlocks still thriving on his property. This forest is not uncommon in Northeast PA where our glaciated soils provide ideal conditions for valuable timber trees. What is uncommon is the way Stone and his forebears chose to manage this splendid forest. Instead of cutting timber or building home sites, he made a decision to forever protect his land from commercial uses. He has insured the protection of his forest’s wildlife habitat. 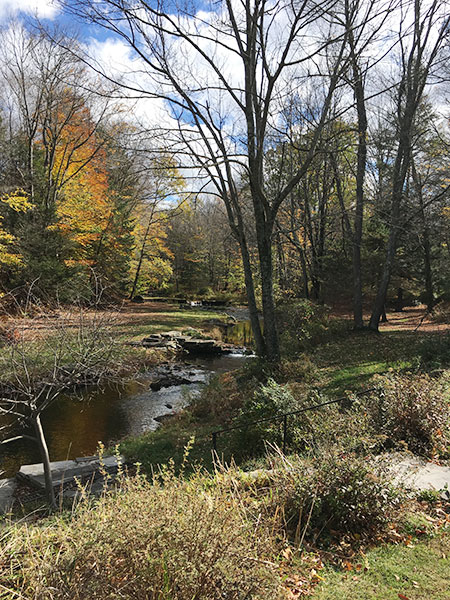 He is contacted many times a year by both local and out-of-state companies with sights on his acreage. “The timber people would love to come in here and cut,” said George. “They’ll use any excuse.” Others offer Stone an additional way to make handsome profits on his holdings. “Developers know the property exists, and they pursue it,” Stone continued. “Last summer a Texas real estate firm was interested in building a resort in this area.”

Why did George Stone resist these rich real estate opportunities and decide, instead, to protect his land from commercial timbering or development? “We love this area so much. If it were ever cut or broken up and developed, everything would go downhill from that point on,” he said. Stone also believes that keeping his acreage intact protects adjacent real estate values and preserves the rural character of the whole region.

Throughout the years the Stone family used the property for fly-fishing, hunting, picking wild blueberries in the summer, and boiling sap into maple syrup in the spring. Now George and Cissy’s children and grandchildren come to enjoy the same recreational activities. “We like to maintain this piece of property in its entirety for their benefit…and we want to ensure that it stays that way,” explained Stone.

In 2006, George Stone placed over 1,200 acres of his forestland in a “forever wild” conservation easement with the Delaware Highlands Conservancy. The easement specifies that no timbering will be allowed on his land except for “salvage cuts” of damaged or downed trees. Attaching this easement to the property deed also assures that the land can not be subdivided or developed, whether the land stays with Stone’s descendants or is sold to another buyer. While placing this perpetual easement on his acreage essentially removes a most valuable use (subdivision) and thus may lower the monetary value of the property, it does provide a compensatory tax advantage. Donating a conservation easement to the Delaware Highlands Conservancy, a charitable organization, may entitle the donor to a federal income tax deduction. The conservation easement now makes the property attractive and affordable to a buyer who is looking for an undeveloped tract, and assures the preservation of precious wildlife habitat for the future.