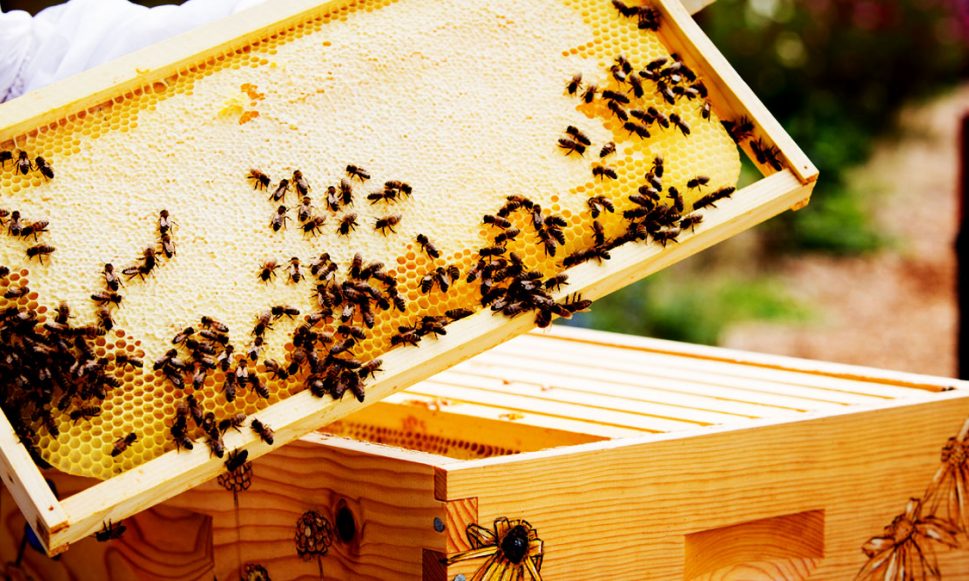 For two of the Delaware Highlands Conservancy’s Green Lodging Partners, Woodloch Pines Resort and The Lodge at Woodloch, the distance from the farm to the table is getting much shorter. 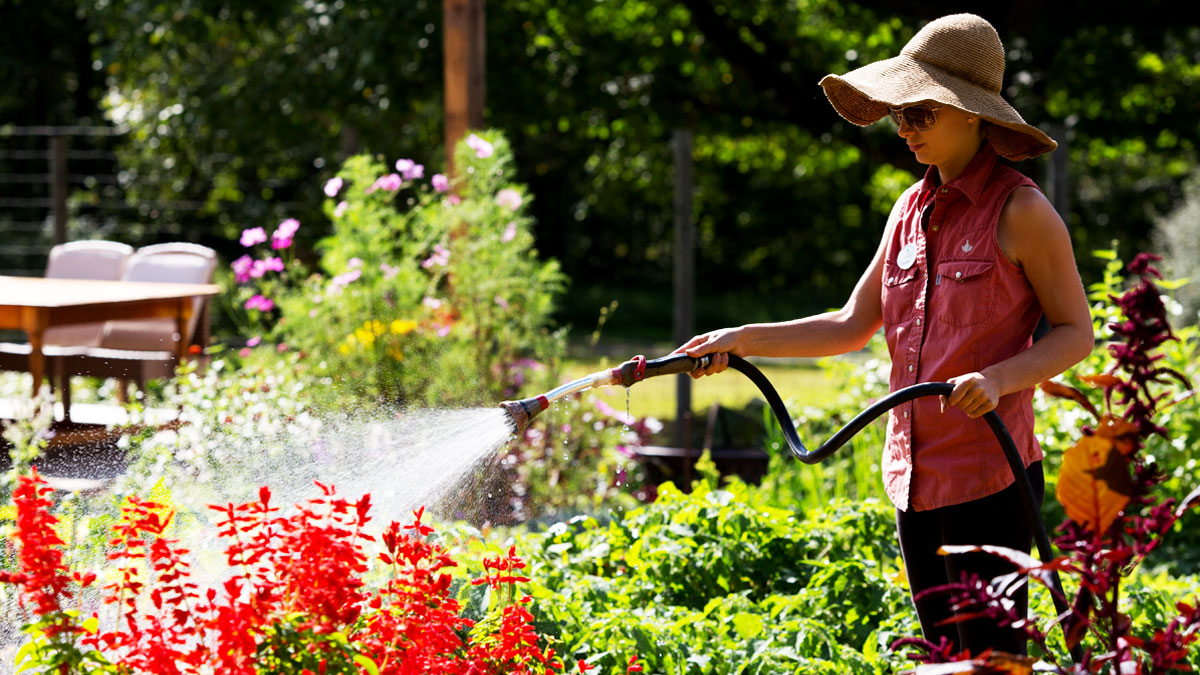 Blackmore Farm, located on the Lodge at Woodloch property, began as a small quarter-acre garden that over the past year has grown to include an orchard and an apiary, now producing 100 times as much food as it did just two years ago. Derrick Braun, the farm-to-table gardener who began working on the garden last June, is proud of the results in the first year of production and is working hard to expand it. “The guests can taste the difference,” says Derrick.

It’s a learning process—and one the staff is happy to take on. “We’re working on transitioning the restaurant menu into something that can work around the food that we have in the garden, and we’re learning about spacing plantings out a little further so we’re not overloaded with 20 pounds of radishes in one week,” Derrick explains. “But if our biggest issue is that we produce too much, then we’re in good shape.”

Currently, the amount of food that the garden provides for the restaurant varies throughout the year. In late spring and fall, all of the salads come straight from the garden. And during the height of the summer, it provides about a quarter of what is served in the dining room.

The garden staff has also been working to reclaim and develop a new two-acre orchard. Once overrun with invasive plants, the space is now filled with a variety of trees and shrubs, including apples, pears, peaches, and plums, blueberries, raspberries, perennial herbs, and more. “We’re just trying to make it come alive again,” says Derrick.

The beekeeper on staff extracted 60 pounds of honey this year from the two hives located in the orchard, and they expect that within the next few years, it will be a productive food plot—pollinated by their own bees. And they’re not stopping there—a worm bin with about 10,000 red wigglers assists in composting more kitchen scraps, and a butterfly box and flowering plants attract monarch butterflies to the garden. Last year, the garden staff raised and released 30 monarchs. They plan to add more bird houses and rain barrels, along with bat houses, raptor poles, and additional beehives. 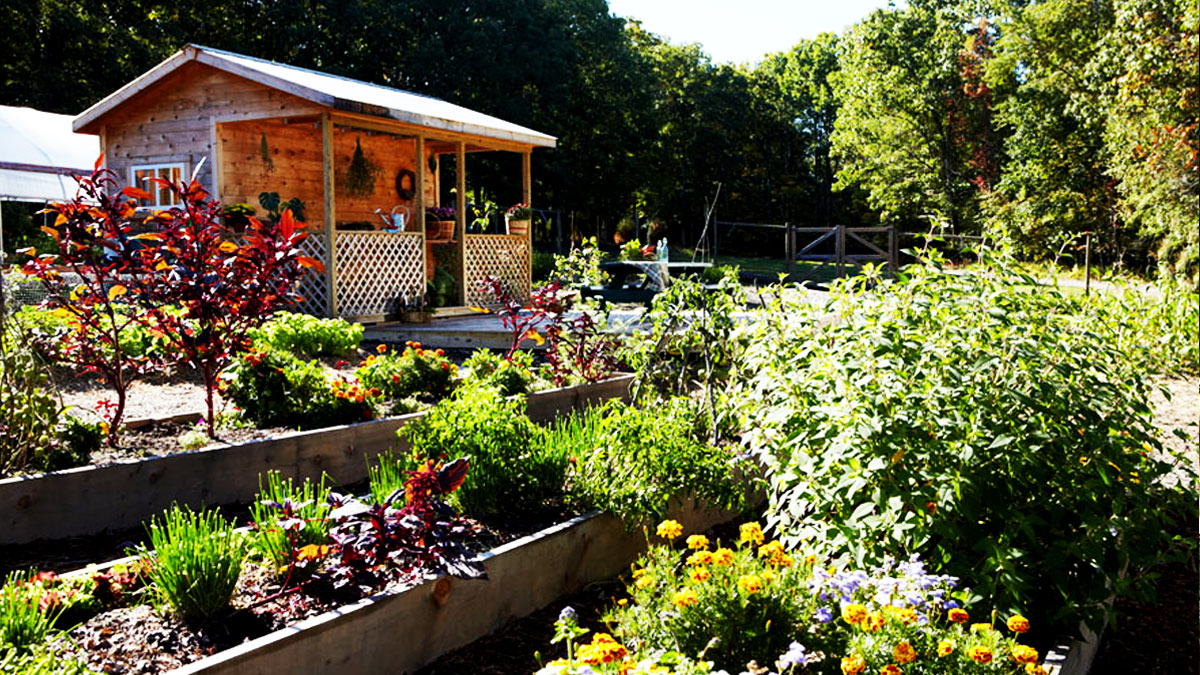 Also supporting the garden and orchard is a compost pile worthy of the size of the resort—the size of a small building, 16 by 18 by 20 feet, the pile has accepted 3 tons of kitchen waste since it was started a year ago, which produced 1.5 tons of usable soil. The Green Team at the resort is working now on growing the pile, doubling the amount of kitchen scraps being deposited per week to 250 pounds, and holding a contest to collect shredded scrap paper from different departments to build a four-foot-deep carbon base. As the paper and scraps are converted into rich, fertile topsoil, they’re delivered back to the garden: it’s increased the garden space by about one-third since the project began.

“Every day our guests ask us—what do you do with all this wasted food? Now we can tell them we put it in the compost piles, and it will be reused in our garden and on the property, not wasted,” explains Alexa Peregrim, Group Sales Manager and the Green Team leader for the compost project. “We’re really excited about it. We were going to transport it to compost off-site, but when we realized we had the space on property, we thought—why not? It reduces the cost of transporting waste to a different area. Now we’re hoping to make most of our waste into compost instead of bringing it to the landfill.”

The staff at the Lodge is also imagining a big future for Blackmore Farm. Derrick hopes that the extra food from the garden that cannot be used by the Lodge will be sold just down the road at the Woodloch Market, and envisions a farm stand on the property one day. He also hopes to start a Community-Supported Agriculture (CSA) program for Woodloch residents. “I see this as a sustainable operation that doesn’t just serve the Lodge, but that serves the whole community,” he explains.

The staff is also finding that the gardens, orchards, and production process is interesting to the guests. “They are food conscious—it’s important to their lives,” Derrick notes. “It is a beautiful and educational space where guests can enjoy the sights, the sounds, the smells. And the property managers are pleased to see reductions in food and waste costs. I’d just like to be as sustainable as we can.”

Both of the Woodloch properties have participated in the Conservancy’s Green Lodging Partnership since 2012, collecting a voluntary $2-per-stay contribution from the guests which is then donated back to the Conservancy to protect the forests, farms, and waters of the Upper Delaware River region. In that time, the two properties combined have raised more than $40,000 for local conservation. These locally owned businesses are leading the way in our community, not just in helping to raise funds for land and water protection, but in demonstrating how sustainability and profitability can work hand-in-hand.

By Bethany Keene | Photos provided by the Lodge at Woodloch