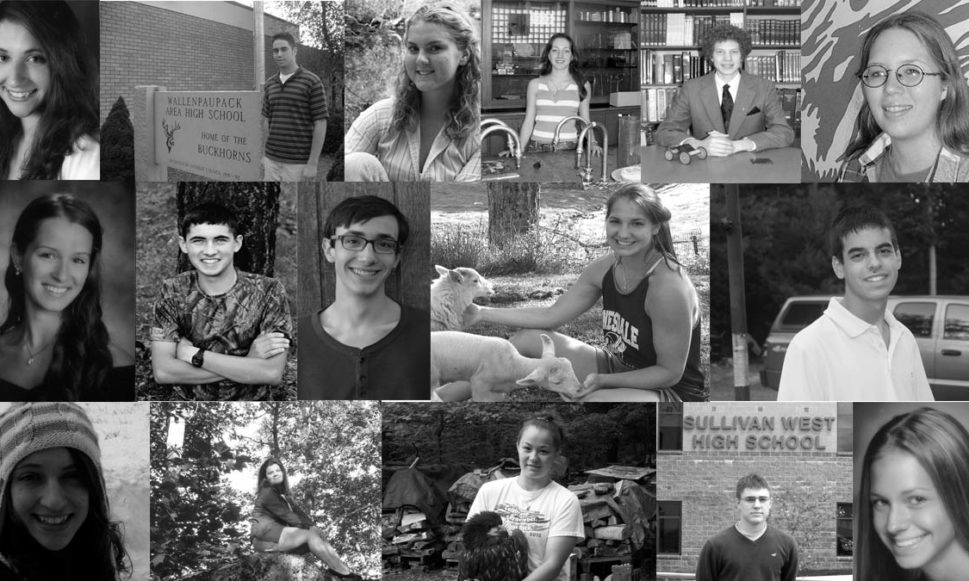 What do you see for the future of the Upper Delaware River region?

Thanks to the Conservancy’s Yeaman scholarship, established in 2003, eighteen local students have received a $1,000 award to pursue a field in environmental studies in college—and to bring their own vision for a sustainable future into reality.

But now, we only have enough funds to offer one more scholarship. Our goal is to raise $10,000 to fund the Yeaman Scholarship for the next ten years and inspire the next generation of leaders to pursue careers in environmental science.

We invite you to make a gift to the Yeaman Scholarship Fund, and help to ensure a bright future for our region and for our local students. (Please write “Yeaman Scholarship” in the “Special Purpose” box on the donation form.)

The Conservancy’s founder Barbara Yeaman understands that protecting our natural world into the future means educating our kids today. The scholarship embodies Barbara’s vision and the dedication of our members to protect our special Upper Delaware River region, now and for future generations.

We asked this year’s Yeaman scholarship recipient Truth Muller what he imagined for the future of the Upper Delaware, and how his education was going to help him realize that vision. He had this to say:

The American Shad, “America’s Founding Fish,” has swum the Delaware since before North America was a known continent. It is a fish that has weathered the entire course of United States history, the rise and fall of intense pollution and brutal exploitation, and come out on top. It is a fish that fed settlers first arriving in the new land, fed Washington’s troops at Valley Forge and fed the founding fathers in Philadelphia as they forged a new nation. It inspired some of the writings of Thoreau, fed the soldiers of the Civil War, sparked the invention of fish hatcheries for conservation purposes, and stimulated the economy of growing eastern cities.

Despite all adversity, the shad continue to swim as adults up the Delaware River, and return with millions of offspring down it to the ocean, every year. This is because, nowhere along the Delaware’s entire length, from source to sea, is there a single dam——a trait so rare on rivers around the world that it is almost unheard of.

This is my vision for the Upper Delaware River region – one forever free of dams, free of pollution, deoxygenation, and toxic algal blooms, free of invasive species. It is a vision that is entirely attainable, for the Delaware is today healthier than it has been in decades, thanks to the efforts of conservation organizations such as the Delaware Highlands Conservancy.

I wish to see it once again a fully self-sustaining and pristine river, one that will always have shad riding its currents, without needing further life preservers from mankind. This will take time, but it can indeed be done. My life is intrinsically tied to water, be it fresh or salt, and the projects I have created during my high school years are a testament to my ultimate goal of being a Marine and Environmental Scientist. I intend to develop my systems for combatting toxic algal blooms, and create new systems to fight other forms of pollution. I hope that someday, these ideas of mine will help that vision for a pristine Delaware come true.

Truth’s vision of a clean, clear, unpolluted Delaware River can be a reality—but only if we work together.

A little-known fact about our founder is that Barbara’s maiden name is “Sturgeon,” a fish of similar importance to the Potomac River that originally spawned her love of such mighty waterways and their vital roles in our lives. It’s especially wonderful to see the Conservancy’s most recent scholarship recipient envisioning a future that begins with the welfare of a fish that has been sustained by a healthy Delaware River ecosystem. Imagine the potential impacts of the other 17 recipients—and the future students we can support if we are able to continue funding this scholarship and fostering its legacy.

By making a gift today, you are helping to inspire the next generation of students to lead the way in protecting this special place. Thank you.