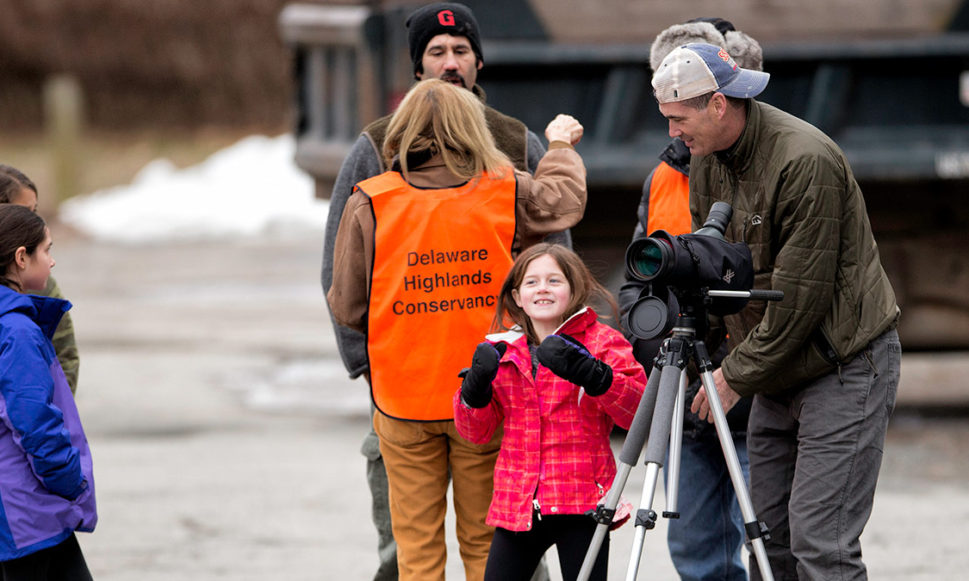 Imagine it. It’s January, and you’re standing outside in a small, uninsulated wooden shed. The wind whips through the open windows, bringing the temperature down to about 15 degrees. Is this where you want to be?

If you’re an Eagle Watch volunteer for the Delaware Highlands Conservancy, the answer is a resounding YES!

Each weekend in January and February, the Conservancy’s Eagle Watch volunteers bundle up in their warmest clothes, grab their binoculars and spotting scopes, and head to our Eagle Observation Areas (also called viewing blinds) along the Upper Delaware River.  They’ll spend the day looking for eagles and helping visitors to the Observation Areas do the same, teaching them about these magnificent birds, their habitat, and “eagle etiquette.”

For some Eagle Watch volunteers, spending their winter weekends this way has become a way of life. Brad and Denise Orey first began volunteering nearly twenty years ago in 1998, before the Eagle Institute and the Delaware Highlands Conservancy had merged. They enjoy viewing eagles and the birds that share the habitat so much that every weekend they drive two hours to the Mongaup Reservoir in Sullivan County, New York. “I’ve learned a lot about the eagles, and it’s very rewarding to be able to share that with people,” Brad explains. 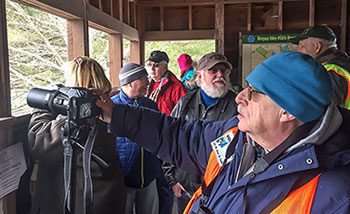 Eagle Watch volunteers Mitch Opresnick—an eleven-year Eagle Watch veteran—and Paul Gamer agree. “I never get tired of seeing the eagles—it is just grand,” Mitch explains. “But my favorite part is seeing the reactions of the people when they see them for the first time out in the wild. It’s great to be able to share that, especially with kids.” Paul especially likes when people come back year after year to visit him and observe eagles, but his favorite story is that of a grandfather and his grandchildren. Paul directed them to the Lackawaxen River Access, and two hours later they returned and gave him a big hug because the kids were so excited that they had gotten to see an eagle fishing.

In addition to helping visitors see eagles in the wild, the Eagle Watch volunteers fill an important role—educating the public on “eagle etiquette.” Eagles are extremely sensitive to human presence. The volunteers help the visitors view them safely without disturbing them—disturbances  force the eagles to use precious energy they need to survive in the winter months. And their efforts pay off. As Brad explains, “I’m seeing the benefit of the education, because we don’t have nearly as many incidents where people are not following eagle etiquette. It makes it easier to share our knowledge, rather than just keeping an eye on things.” 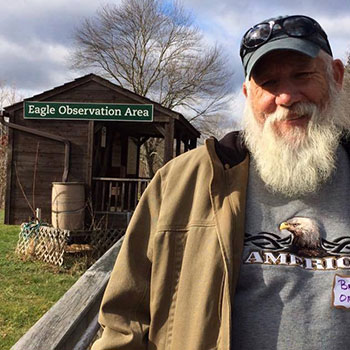 The cold weather doesn’t deter the volunteers, either. They see it as the perfect excuse to get out of the house during the winter—breathing the fresh air, enjoying nature, and meeting new people.

As for their favorite stories? Brad fondly remembers a winter many years ago in which a major newspaper published an article showcasing the eagles along the Delaware River, mentioning that the eagles fly over the blind at 4pm. He was at the observation area that weekend and at approximately ten minutes to four, a car pulled up and a group of people jumped out, saying “Hurry up, hurry up, it’s almost four!” Of course, the eagles are not on any sort of schedule—and as Brad remembers, they did not fly over at 4pm that day. (But if you are wondering about the best time to see eagles, it’s typically early in the morning, or late afternoon.) For Mitch, his favorite memory is watching an eagle catch a trout that was far too big for it—and, unable to fly away with it, was forced to swim to shore still holding on to the fish, which the pair then feasted on for days. 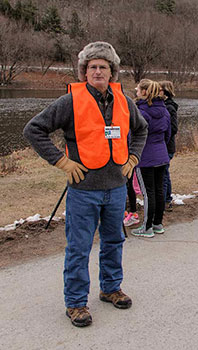 There is always something to see at the Eagle Observation Areas, and with approximately 3,000 visitors to the viewing blinds every year, volunteers play a crucial role in both educating people of all ages and helping to protect the eagles they love.

Thank you to all of our Eagle Watchers!

If you’re interested in joining Brad, Mitch, Paul, and the rest of the dedicated Eagle Watch volunteers, the Delaware Highlands Conservancy hosts an annual Eagle Watch Volunteer Training Day in early December at our Upper Delaware Visitor Center in Lackawaxen, PA. To learn more, visit DelawareHighlands.org/eagles or sign up for the Conservancy’s e-newsletter list. Additional volunteers are needed throughout the year to visit protected properties, help out in the office, and staff booths at events.

Individual photos, from top: Paul, showing his camera; Brad, outside at the Eagle Observation Area; and Mitch, at the Lackawaxen River Access. The Conservancy’s Eagle Watch volunteers may be identified by their orange vests.